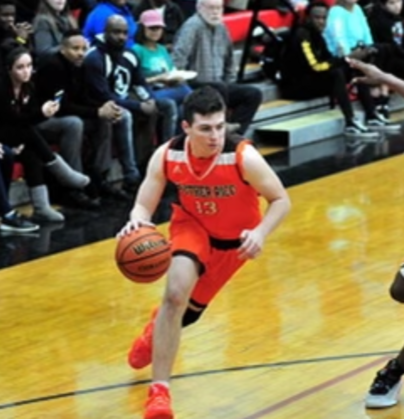 Marcus Watson Jr.- Morgan Park 2020 Young Fella has always been under appreciated, always been over looked for all his talents, yet he has always been “the engine that makes the car go,” from the first day I saw young fella play he has been a “winner!!” he has played on some of the more high profile teams with some of the more high profiled players who get more attention, but he has always been the most important ingredient. The kid who locks down the opponents supposedly best guard, the player that hits the key shot, the player that drives and kicks for the game winning 3, the player that does everything to get the win stuffing the stat sheet on whatever is needed that game, then quietly heads into the locker room not seeking the attention. Yes Yes Yes!!!! ” Young Fella Is As Tough As They Come!!!” Again he has led his team this summer playing against the supposedly “Best in the Nation”and All young Fella has done is Stand Tall!!! showing he can compete with anyone. If you want a pg that gets its done passing, scoring or willing his team to victory Marcus Watson Jr. is your kid.  College Coaches Get On Board. There is not another kid in his class who impacts the win on every level, yes young fella has risen too a Top 10 player in the class, his position is defined at the next level Point Guard. While others are getting the early attention from College Coaches, let it be known now this is a Division 1 player mark it down I put a Stamp on this one.

There are players that sometimes college coaches miss out on because they peg a player into a certain position or peg a player into a certain body type of projection at the next level, sure the 6/6 wing or 6/2 point guard are attractive to the eye, so is crazy athleticism or jet burst speed, but there are certain players who just flat out get it done. Yes Tyler Cochran (Bolingbrook High School)is one of those players, he is a kid who can do virtually anything on the floor and is a prospect whom College Coaches need to start knocking on the door right now!!! I watched young fella give Mac Irvin Fire and the more celebrated players 30 plus and be the best player on the court easy, I’ve witnessed young fella lock up big time college recruits 2 years his superior. The Kid Should Have Offers and College Coaches are missing the boat. The way I see it is they can’t see all the intangibles and talent young fella possesses, he is not a numbers chaser or stats guy, nor does have that ultra athletic body, but he is a winner a player that does everything for his team, a player that plays both sides of the floor and a player if you’ve only seen him once you may over-look or under appreciate. He has that combination that sometimes only a coach who knows the game understands. He has some of that Chris Singletary(Former All-State(Farragut) and Kent State All Conference) in his game the fact that he can be a big guard and can also go inside and rebound among-st the trees, He also reminds me of former player Reggie Johnson( Former All-State(St. Joseph) and (Miami Ohio/ Hampton- All Conference and European Pro). This past weekend at the Team Rose Tourney. I personally watched young fella bring his team back in the semi final game. The Hoopers were down 5 points with about 55 seconds to go, young fella gets a defensive rebound dribbles down the court and buries a 3pt basket 3 feet beyond the nba 3 point line in a defenders face,(the player looks at his coach and shakes his head) now the crowd going crazy (the gym standing room only) the opposing player brings the ball up the court with his team up 2 and 15 seconds left. Looking to stall the ball the guard attempts a cross over gotcha!!!!  Tyler times the dribble perfectly and picks the pocket of the opposing guard at half court and lays the ball up to tie the game. A time out and an unfortunate turnover gives Hoopers a chance to win with 3 seconds left and having to go the length of the court had everyone thinking the game is going into over-time. Tyler says I’ll take it out, he throws a length of the court pass to his teammate right at the basket for a game winning layup WoW!!! Yep young fella has done it again, come up with the game winning plays at game winning time. Coaches let me reiterate this kid has that on the court game, go watch him, invite him to your team camp, get to know him, he is a bonafide prospect that College Coaches are sleeping on. As it stands right now Tyler Cochran 2019 is one of the top 20 players in the class, no doubt in jrhoopselite a player that can make a significant impact on the next level. In our series of of College Coaches Get To Know. We would like to to introduce prospect number # 1 ” Mr Get It Done!!!!” Tyler Cochran 2019…